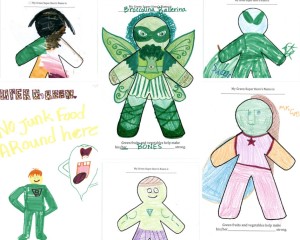 Captain Kale: Come on, Kiwi, we have a junk food villain to catch!

Narrator: It was a dark and stormy night when Captain Kale and Kiwi arrived to Dr. Burger’s Fast Food mansion. Meanwhile, Dr. Burger is working on his Evil Veggie Destroyer.

Dr. Burger: HAHAHAHA. That healthy Captain kale doesn’t know what he’s up against. He doesn’t have a chance against my evil Veggie Destroyer! He’ll be a burger just like me in no time!!

Narrator: As Captain Kale and Kiwi started snooping around the mansion, looking for Dr. Burger, kiwi fell into the juicer.

Kiwi: AHHHHHHHHHH!!!!! Captain Kale help me! I’m about to get juiced!

Narrator: With his strong bones, Captain Kale goes in the juicer and pulls out kiwi.

Narrator: Now that they’re past the trap, Captain Kale and Kiwi go on the hunt for Dr. Burger standing inside.

Kiwi: We’ve got you now Doc! There’s no escape!

Dr. Burger: It’s too late! My evil veggie destroyer is complete and there won’t be a single healthy vegetable left on Earth! Muuuuuahahahahahaha!!!

Captain Kale: You’ll never get away with this!

Captain Kale: Thanks for saving us, Super Spinach! We owe you big time!

Narrator: Dr. Burger was once and for all captured and put on a healthy diet.